A Very Funky Ferry Ride across Four Countries in 500 Meters

Officially the pontoon ferry across the Zambezi River at Kazangula, about 75 km west of Victoria Falls, that the Tour d’Afrique takes each year, is the crossing between the Zambia and Botswana borders. But in fact the midstream point of this sometimes treacherous ride marks the only spot in the world where 4 countries meet, namely Botswana, Namibia, Zambia and Zimbabwe. In doing so a ferry passenger “visits” all 4 countries as the ferry struggles and smokes from one side to the other during the 8-15 minute crossing. At one point the boat does an upstream push towards an island that is in Namibia before drifting downstream to the other side. Moreover the landing on the Botswana side happens on a spur that is actually Zimbabwean soil – the Zimbabwe border fence just happens to have been moved very slightly east so that once off the boat traffic can proceed unhindered over the last 100 yards to Botswana border control. 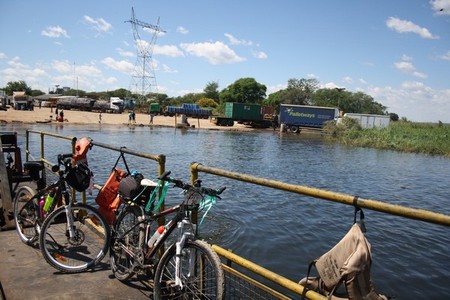 This fascinating legacy from the colonial scramble for Africa has had a most colorful history. For the past 60 years the four countries have laboured to reach agreement over the construction of a bridge. Given the relatively limited width and depth of the river at this point this would not require a particularly challenging engineering design. 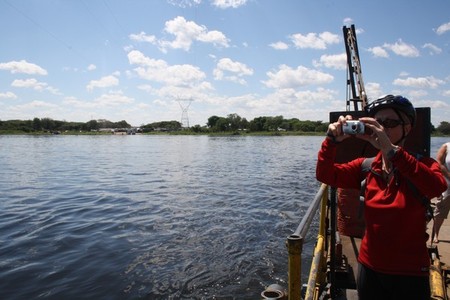 During the Zimbabwean War of Independence, the “rebel” ZANU-PF fighters used the ferry to smuggle arms into then Southern Rhodesia. In response the Prime Minister of the pariah Rhodesian state, Ian Smith, had his air force bomb and sink one of the ferries in mid-stream, in order to discourage this practice. And in 2006, a ferry flipped while carrying a brand new Volvo semi trailer cattle truck. Until recently one could still see the wreck of this boat and the truck on the Zambian shore. 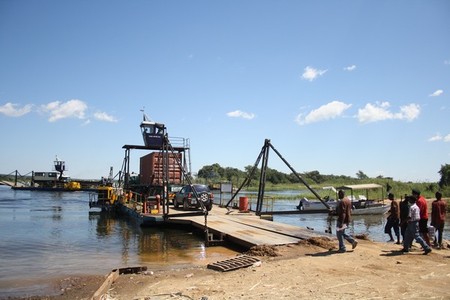 There are 2 pontoon boats typically in operation today, one that carries passengers, cars, regional buses, as well as tourists on excursions from Vic Falls to Chobe National Park. For these customers the wait to cross is typically no more than an hour. The other somewhat larger pontoon slowly shuttles one of the literally hundreds of transport trucks lined up on either side across the Zambezi. In fact by googling “Kazangula ferry” you’ll find that this crossing is now best known for being the major bottleneck in the southern African transport network. One of the reasons for this involves the notorious Zimbabwean regime of Robert Mugabe. Many trucks travelling between South Africa and the copper mine belt of northern Zambia and the Congo’s Katanga province used to use two Zambia/Zimbabwe border crossings – the bridges at Vic Falls and Siavonga . But when Mugabe astronomically raised the tariffs on trucks transiting through Zimbabwe, the trucking companies decided it was cheaper to pay their drivers to wait as long as 7-10 days at Kazangula and avoid Zimbabwe altogether. 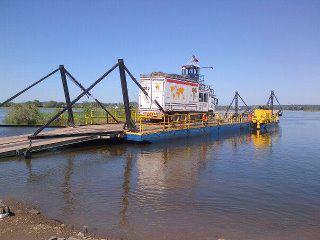 Now Zambia and Botswana have entered into an agreement to conduct the feasibility study for a road/rail bridge and a “one stop border crossing” beginning in mid 2012. But whether this project will finally take-off as planned and will not be scuttled by further political bickering remains to be seen. In the meantime all we can say is wow … and good luck to all who clamber aboard. This is indeed a most fascinating and funky ferry.