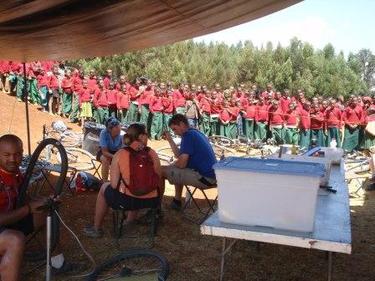 I knew Dylan had travelled to Mozambique, but I never knew he’d travelled to Ethiopia as well. So the question remains; why do our cyclists get pummeled by rocks year after year?

Yesterday I was waiting at the 125 km mark to set up a refreshment stop. The heat was sweltering. A young boy walked past me and climbed into some sort of woven bamboo bus stop. Envious of his shade I joined him. He sat there doing his homework before heading to school. I asked him a few questions about his studies and he rebutted with the standard: what is your name, nationality & “where you go?”. A mini-van which I mistook for our support vehicle was approaching. When I flagged it down I found it was full of Farengi, but not ours. They were a group of Polish tourists here trekking in the Simien Mountains. I was explaining the nature of our cycling expedition when suddenly the van was surrounded by a mob of insane locals. One of the passengers in the back had opened up the window and began handing out single Birr bills. They left shortly after I expressed my concerns. I had to move the refresh stop to get away from the mob.

The tragedy is that there intentions are genuine but their methods are wrong. This is the cause for begging children. There is no longer famine here. Every inch of the countryside is cultivated, irrigated or designated grazing land. In years past I have seen children beat up older kids who steal the pencil or the Liberty Bell pin that one of the cyclists had given out. If people want to make a donation they should go directly to the headmaster of school or to a church to ensure that any gifts are distributed properly and throughout the community.

The opposite side of the story is that throwing stones is learned behavior. People here use stones to herd livestock, discipline children or even just when playing games. Also most white people they see normally fly past in UN Land Cruisers. For our riders clad in multi-coloured spandex, helmets, gloves, glasses and cleats the children don’t understand us. We rank somewhere between superhero and alien.

Today was my first full day of riding since Alfons Camp, where I had to get my leg sewn up. Now that the stitches are out I just need to get back in shape. Tomorrow is the Blue Nile Gorge, truly the Alpe d’Huez of this tour. It’s a 22km climb with an elevation gain of 1550m. And yes, it’s a time trial.