Wishing Upon A Front Fork 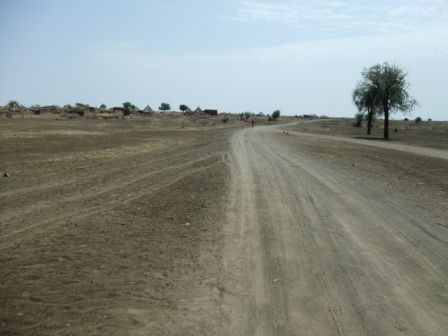 Yesterday afternoon there was a flurry of activity in our first 'bush camp' as riders either swapped tyres on their bikes or helped other riders swap tyres on their bikes. The sound of tents flapping in the wind was interrupted only by the constant whoosh of tyres being deflated.

It was with much trepidation that our first day of riding on dirt finally arrived. While last year's riders would have experienced this much earler in the tour (as they entered Sudan), road builders in Sudan have been hard at work paving the main road from the North of the country to Khartoum.

This year, recognising that we were being deprived of precious off-road mileage (or should that be kilometreage), the route was rejigged so that we're passing through Dinder National Park and with that comes two and a half days of unpaved, dirt roads.

Having spent much time contemplating what bike to bring, it is now in Africa that our decisions are being tested. It is virtually impossible to change our choices of bike now.

The dirt began and within minutes you began to wonder 'what if'. The road was composed of fine gravel, corrugated in patches and sandy in other, mostly overlapping patches. Choosing your line wisely was important – to one side of the road the corrugation would shake you hard and to the other you'd be performing the bicycle equivalent of 'swathing' through sand.

When I finally reached the lunch truck, the relative rider ranking was clearly different. Riders with front suspension were (for the most part) smiling, those with rigid cyclocross bikes looked weary from hard work.

The afternoon was, despite much of the same terrain, surprisingly good fun. Occasionally the road would become slightly less 'throw you all over the place if you don't hold on tight with both hands' and more 'go fast' and there were some beautiful sections that rolled up and down. The constant corrugation led to sore forearms (for those of us without front suspension) and you soon forgot any other sores picked up in the last week.

The road took us through a number of local villages and in most of them, villagers lined up by the side of the road to cheer us on. Occasionally we'd cycle past a school building and nearly a hundred children would come out running and shouting. I apologise to their teacher for the disruption.

As I sit here writing at 6pm, there are still riders coming in, nearly 11 hours after they set off this morning. The sky is nearly overcast and there is potential for rain. Dinner will be well received tonight.

Leave a Comment for "Wishing Upon A Front Fork" Cancel reply