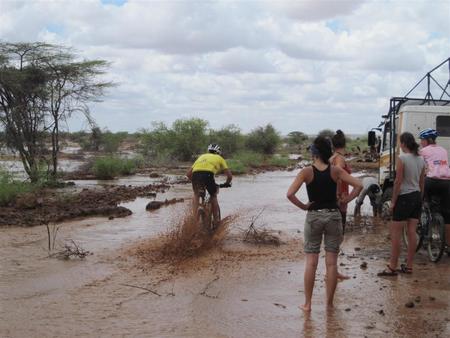 Greetings from your African dirt correspondent, exactly a month on from our first taste of dirt in Sudan. I'm writing from a small settlement called Laisamis, 95 kilometres from a dusty town called Marsabit, en route to Nairobi.

As we left Ethiopia, the heavy rain that had plagued the tour eased up and we were generously treated to several days of dryness. The weather changes quickly though and at 4:30am on our rest day in Marsabit riders were busily putting their rain flies on their tents. The roads in Marsabit quickly turned to mushy mud and vehicles (including our own bucky, the 'Drama Queen') were getting stuck every few hundred metres. We've not had to ride over any serious mud so far on this tour so this was shaping up to be an interesting riding challenge.

There was no real rain overnight and as the riding week began, we were told of the muddy sections that awaited us on the road. After a pretty serious downhill, I settled down for a morning of gradual descent to lunch. Soon enough the first mud arrived, vehicle tracks were carved half a foot in and any clear cut path soon vanished.

Riding over the mud was slippery and I was very glad of my previously ill-thought out decision to use fairly skinny dirt tyres. The mud attaches to your wheels quickly and within minutes it's rubbing against the inner edges of your frame and fork and collecting on top of your brake callipers, making no sound but slowing you down noticeably.

For one of the early sections, there were a hardened section on the sides of the road which was much quicker to ride along. I was riding along merrily at somewhere between 15 and 20 kmph when I caught sight of a local. He shouted and pointed straight across the road to something just metres in front of me. Slamming on my brakes and almost vaulting over my handlebars, the object he was pointing to was immediately apparent – a deep and wide crack in the earth.

Saved from this possible end to my riding day, I continued on to lunch, passing through water logged section after water logged section. The clear rain water turns brown as soon as it touches the soil and the standing water covering the depressed sections of road leaves a layer of fine grit on your skin, clothes and bicycle as you pedal through it. Bicycles were creaking for much of the day as the water washed off lube.

Visible from lunch was another water logged section of road where a truck had got stuck in a seemingly deep pothole. The cab of the truck was arched at 20 degrees to the surface of the water and it seemed that it was submerged about a metre. Normally the puddles aren't that deep, or at the very least, their surface maintains the same consistency as the road immediate before and immediately after it. Another rider Jason was standing on the other side of the puddle scraping his shoes but I took little notice of this. Feeling confident at my ability to ride such puddles, I cycled straight into this puddle, picking a line that followed the ruts on the road leading to it.

The first small puddle was fine but less than two metres into the second puddle I felt my front wheel disappear into some mysterious underwater chasm and I actually went over my handlebars this time. Luckily there was no hard impact, unluckily I was now soaked from neck down. The crew and passengers of the stuck truck broke into laughter and Jason, who hadn't seen me cycle in, was shocked to see just my head floating above the water. We stood and watched as three more riders crossed, somehow picking a line where they stayed relatively dry. One of the TDA trucks tried the same and was wedged underwater within seconds.

The afternoon featured the much promised 'extreme corrugation' and arriving to camp was a timely relief. As riders came into camp, it was pleasant to see some of the chronic complainers extolling their enjoyment of the day. 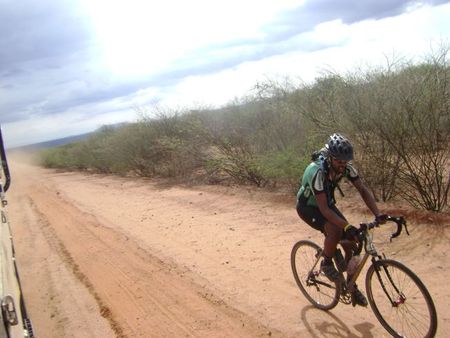 Leave a Comment for "Rolling over Muddy Ground" Cancel reply