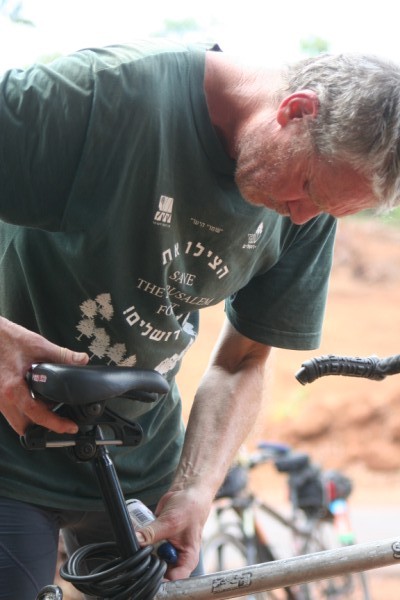 It was a week ago that I had my encounter with the elephant. A couple of days ago I was released from the hospital and celebrated by asking the room service for a big banana split. Today I decided, it was time to venture out of the hotel. As one would expect after such an ordeal, the world looked a bit different. The colors felt sharper, the trees across the street more glorious, the leaves an intense greener. I feel have been given a new gift, new eyes to look at the world.

I walk and feel awkward, part of it is just being careful where I step, avoiding people so as not to be touched or bumped. Any wrong move and I feel the pain. The immense closeness here, the lack of personal space now feels threatening. Part of the awkwardness also, are my new baby steps reentering the hustle and bustle of normal life.

I walk up the stairs into a book store, carefully putting one foot in front of the other. The security guard is watching me intensely. I want to tell him, I want to yell, I was trampled by an elephant. But I smile weakly and walk into the store, now being ignored as one of many customers.

Back in the hotel the manager knocks on the door and asks if I mind speaking to the media. He says they are very interested in my story. He suggests a meeting on a patio. It was the owner’s son who recommended the doctor who took care of me, so I agree.

Several journalists with cameras are awaiting me. The owner, not failing to recognize an  opportunity for publicity or perhaps instigating the whole thing, quickly becomes a set designer to make the hotel look good. Then there is the director, positioning me in front of the camera, opening my shirt to showcase my injured arm. At first I protest, then I remind myself of the doctor and I allow him to do whatever he wants. My new approach to life.

The shooting begins, I am asked to describe my name, where I am from, what happened. Close ups of my injuries are next and the owner is now positioning himself for an interview. I watch amused. The media has got what it wanted and so did the owner. But than I change my mind, I surprise them. “This is not the story” I tell them. “You want a story come back”. I decide I may as well say something else, something that may reverberate somewhere, somehow. I tell them, I am not a victim. I tell them I am not angry at the elephant. I talk about how humans have encroached on the wilderness and sometimes the wild attempts to show its emotions.

I tell them about the need for civility on roads, the need for politicians to create laws and for administrators to enforce them. I tell them that it was the car driver who spooked the elephant. I talk about the benefits of cycling tourism if the infrastructure is improved. One cameraman is smiling, seems to be interested. I look at the reporter, wearing aviator glasses, emotionless, unmoving.  I said enough, I decide. The show is over.

Tomorrow I leave for home. My Indian adventure is over – for now at least. Two months ago I had the emotions of a youth, on the brink of his first adventure. Today I feel like an old soldier, happy he came, happy he fought on the right side of the war, but now tired, wiser, wondering what happened to the youthful enthusiasm.

Was it really to him that all these things happened?

Leave a Comment for "A weak later" Cancel reply