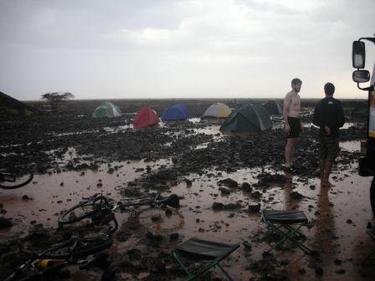 So we woke up yesterday morning to Vimpy blaring “Highway to Hell” over the truck radio & that’s pretty much what we got. We left the leafy jungle oasis of Marsabit & within minutes we were out in the hot desert plains again. I did not ride the morning (opting to catch up on paperwork in the AM and ride the PM), big mistake. I gather the morning was the nicer part of the day with quite a nice descent into lunch. The afternoon however was a different story, it was corrugation and deep sand all afternoon… and that continued all day today. And apparently this is the East African Highway!
I was chatting to some riders and it seems some might be losing the plot! I was told about the bargaining Tim Gane tried to do with the road day, the conversation and yelling matches he had with the corrugations when he asked them “can you just give me one line of smooth, just for a little while”. And the road didn’t grant his request, so he thought yelling at it might change things. I don’t think the road has spoken back yet, I won’t have to get psch consultants just yet!   At lunch the riders were discussing how their perspective has changed over the past couple of months. Initially a paved road with a steep hill was hard work and they complained about it, apart from Malcolm who is fantastic. Now they would give anything (even their baby wipes!) to change these roads to a long, steep paved road. Apparently there is one more day of these roads into Isiolo and then the worst is over. It can’t come soon enough for most of the riders!

Leave a Comment for "Highway to Hell" Cancel reply