Objects In The Mirror Are Closer Than They Appear…

Riding a bicycle through West Africa isn’t all rainbows and butterflies, especially without rearview mirrors, tinted windows or air conditioning. As we leave the desert and begin to make our way into the jungle, everything is changing. Crossing from Mauritania into Senegal revealed not just a cultural border, but an environmental one. The humidity is as thick as the sand under our tires. The vast horizon lines of the Sahara to our East and the Atlantic to our West are increasingly becoming speckled with baobabs, rice fields and people in colourful attire moving at a rapid pace through a village market. These changes make cycling more difficult, but they are also the reasons we are here.

Imagine cycling early one morning through the Senegalese foothills – rolling hills with Acacia trees lining the shoulder, their thorns just aching to get stuck in your tire. A quiet morning, you are not surprised to see a young boy herding goats towards you down the middle of the road. Attempting to repeat the local greeting in Wolof, you are cut off by the surprise of a machete waving through the air as you roll past him. There are many ways that you could respond – shock, fear, anger. Yet in this moment it is important to realize that you are currently cycling through a culture where a work commute can mean a 9-year-old boy herding cattle down the road with a machete in one hand and a stick in the other. With no free hands, he waves the shorter of the two utensils in greeting. The same surprise might come from a grown man running at you with a spear attached to the end of a long stick. Despite his age, he shares the same enthusiasm as the boy for a lycra wearing circus-act riding through his home town. His own safety is less of a concern than getting to fist bump every rider coming through town.

These moments can be terrifying, but they also define the experience you have in your travels, along with the experience that the locals have with you. As a tourist traveling in a privately hired car, you are physically caging yourself off from the outside world. You become a spectator looking out of a window, enjoying the view but closing yourself off from the landscape and people you have come all this way to see. 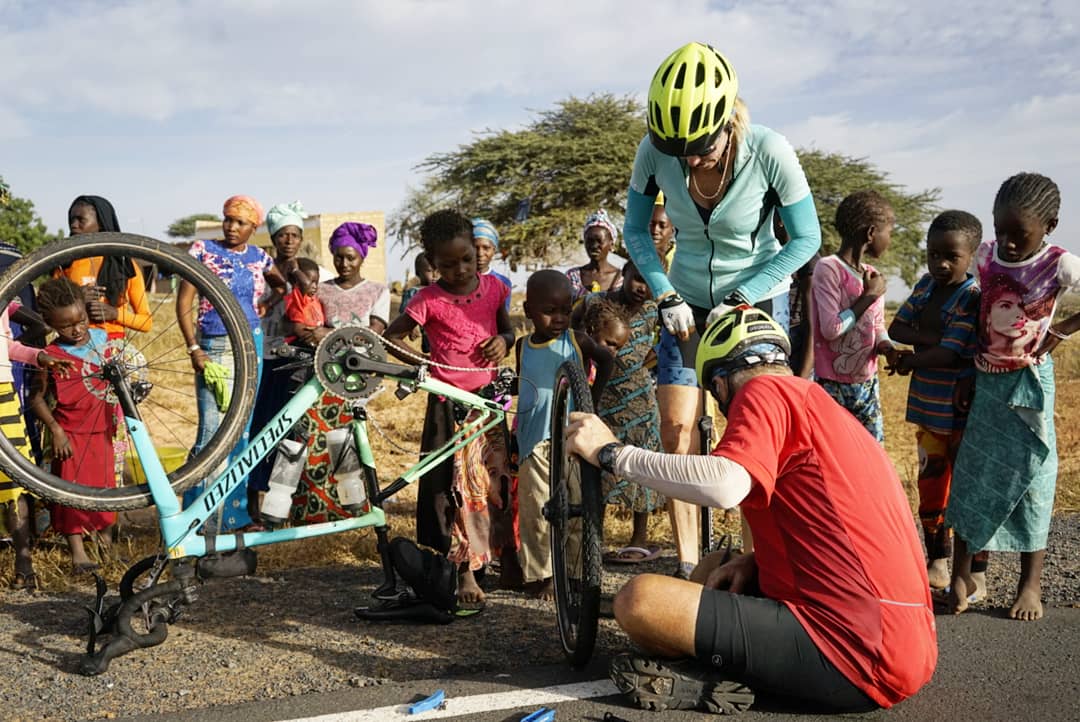 On a bicycle, the experience is inherently different. You have less control over the narrative of your travel, unable to roll the windows up to ignore a vendor or curious child. If you came to a place to experience it, why not do so fully? Just as you want to ooh and aah at what you are seeing, taking pictures along the way, the people you are passing are doing the same. They might giggle at your clothes or peel with laughter at your attempts to speak their language, but at least you are giving them a chance to interact with you, not armoured in a way that restricts nearly all interaction. Yes, you may have your arms or legs touched as you pass by or even have rock thrown at you from a child. However much more often you will be applauded by crowds, offered shade in a vendor’s hut, or receive a friendly push up a seemingly endless hill. Making ourselves vulnerable to people, climate, and culture can seem like a big step out of a tourist car, but its rewards are greater than its risk.

Too often tourism is a one-sided affair. A bicycle is a fantastic mechanism to shift the power dynamic between the tourist and the local. Literally removing yourself from a spectator’s box makes you more approachable and evens the playing field in which interactions take place. The people you meet, the places you see are not just closer than your mirror suggests, they are a part of your everyday experience. On TDA, we will always choose the bicycle.

Your postings are so impressive. Thanks

However, I am DEEPLY DIAPPOINTED to discover that the Tour doesn’t consist of being carried around in a hermetically sealed cast-iron sphere onto whose interior a loop of photographs of rainbows and butterflies plays continuously. I feel that TDA is definitely missing out on a chance to market to ne’er-do-wells, layabouts, and opium addicts. WHAT ABOUT US SLOTHS, TDA??!!!

Another super blog. You are such a great writer.

Hi Sophie,
how right you are about your observations – and how perfectly you can describe it – thanks!
I wish you all a continous great journey – greeting from the white mountains in Austria.
Love, Annegrete