IN Places to Ride

IN Places to Ride

One of Australia’s iconic routes is the Savannah Way – a 3700 km track from Broome in Western Australia to Cairns in tropical North Queensland. It passes through 15 National Parks and 5 World Heritage areas. Whether you are riding this on your own, with a group of friends or on the 2020 Trans-Oceania Cycling Adventure, you will be covering just over 2000 km from Katherine to Cairns. 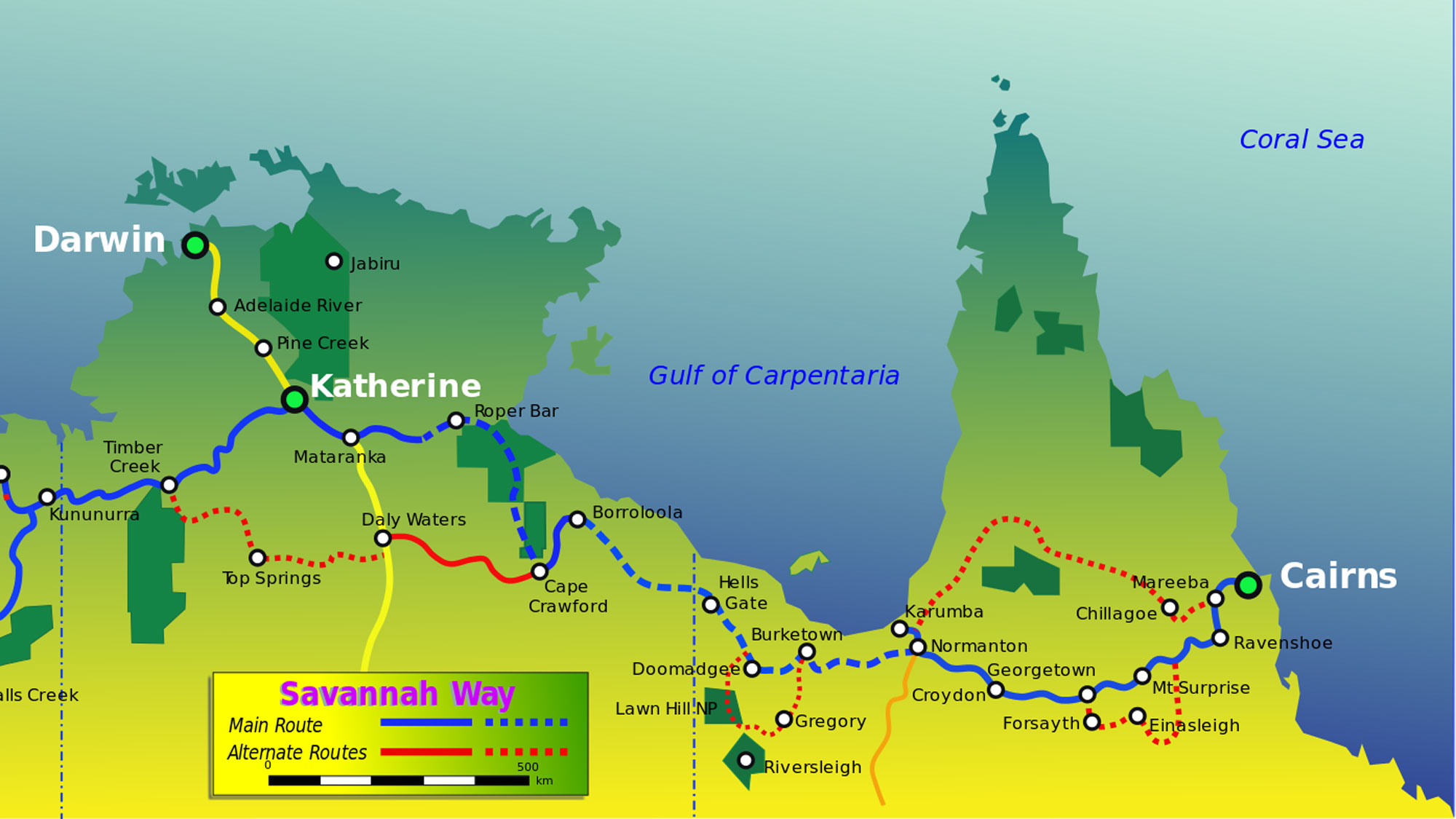 The ride itself will be intense and challenging! Depending on the route you choose, you will be rewarded with some incredible sights and experiences. 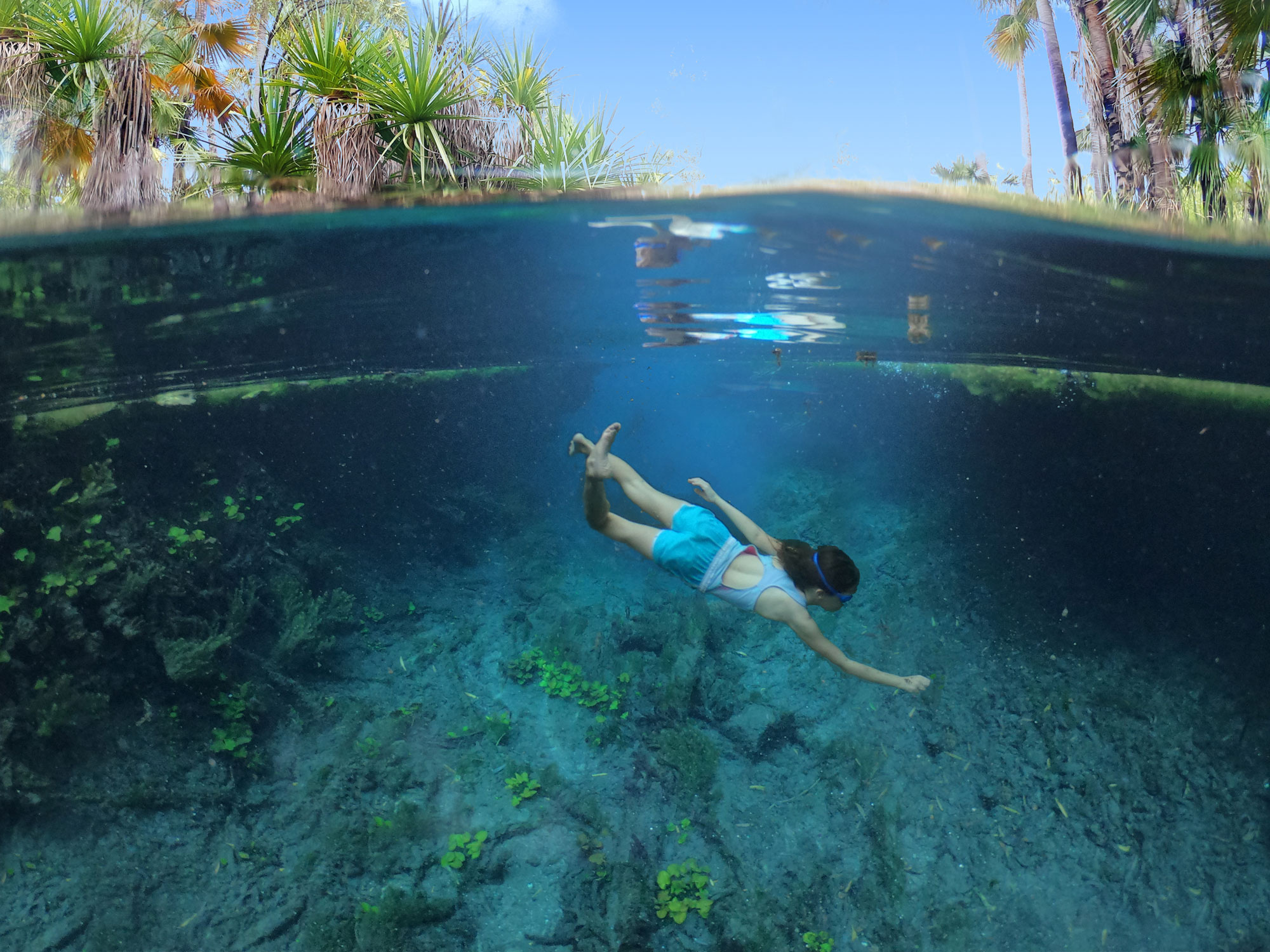 Mataranka, which means ‘home of the snake’ in the Yangmanic language of the aboriginal people who inhabit the area, is a small town of just 350 souls. It is located about 100 km south of Katherine (birthplace of 2011 Tour de France winner Cadel Evans), and is best known for 2 reasons. First, it was the setting for one of the country’s most cherished books, We of the Never Never, Jeannie Gunn’s autobiographical account of her experiences in the outback in 1902. The homestead, which she shared with her husband, Aeneas Gunn, until his death, has been meticulously reconstructed near to the hot springs. A number of characters from the book are buried at the small bush Elsey Cemetery found around 12 km to the south of Mataranka on the Stuart Highway. Second, the nearby Elsey National Park contains the warm (34C), soothing, crystal clear, sandy bottomed Mataranka Thermal Pool. The area is a natural breeding ground for the Little Red Flying Fox. They roost during the day in the stands of bamboo, often in large numbers, and leave at night to feed on nectar from trees. There is also a cooler natural swimming hole, Stevie’s Hole, located nearby. 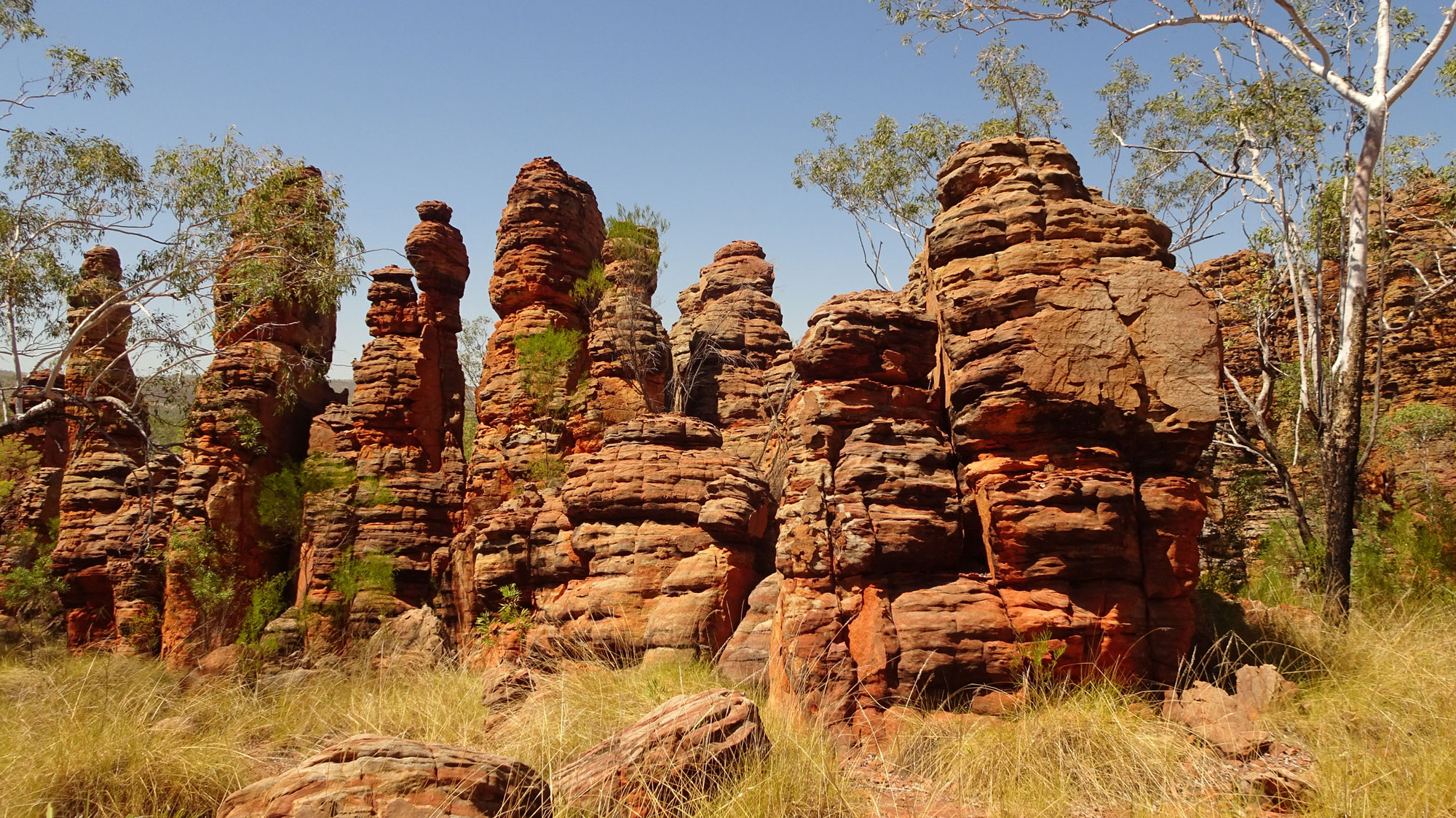 This isolated National Park, the third largest in the Northern Territory, is famous for its spectacular sandstone formations, known, rather romantically, as the Lost Cities. The Southern Lost City is the result of thousands of years of wind and rain erosion. The walls, narrow passages and domes give the eerie impression that they were man made. Well marked walking trails allow you to wander through the bizarre sandstone pillars. The park itself covers almost 10,000 sq/km and incorporates wetlands and numerous rivers, including the Limmen Bight River, but swimmers should be aware of estuarine crocodiles in the waters. It might be better for them to wait until Butterfly Falls for a dip. The road through the park is unpaved and you may see the occasional wild buffalo crossing your path. In the morning you are sure to hear a chorus of birdsong as your prepare for the next day’s ride 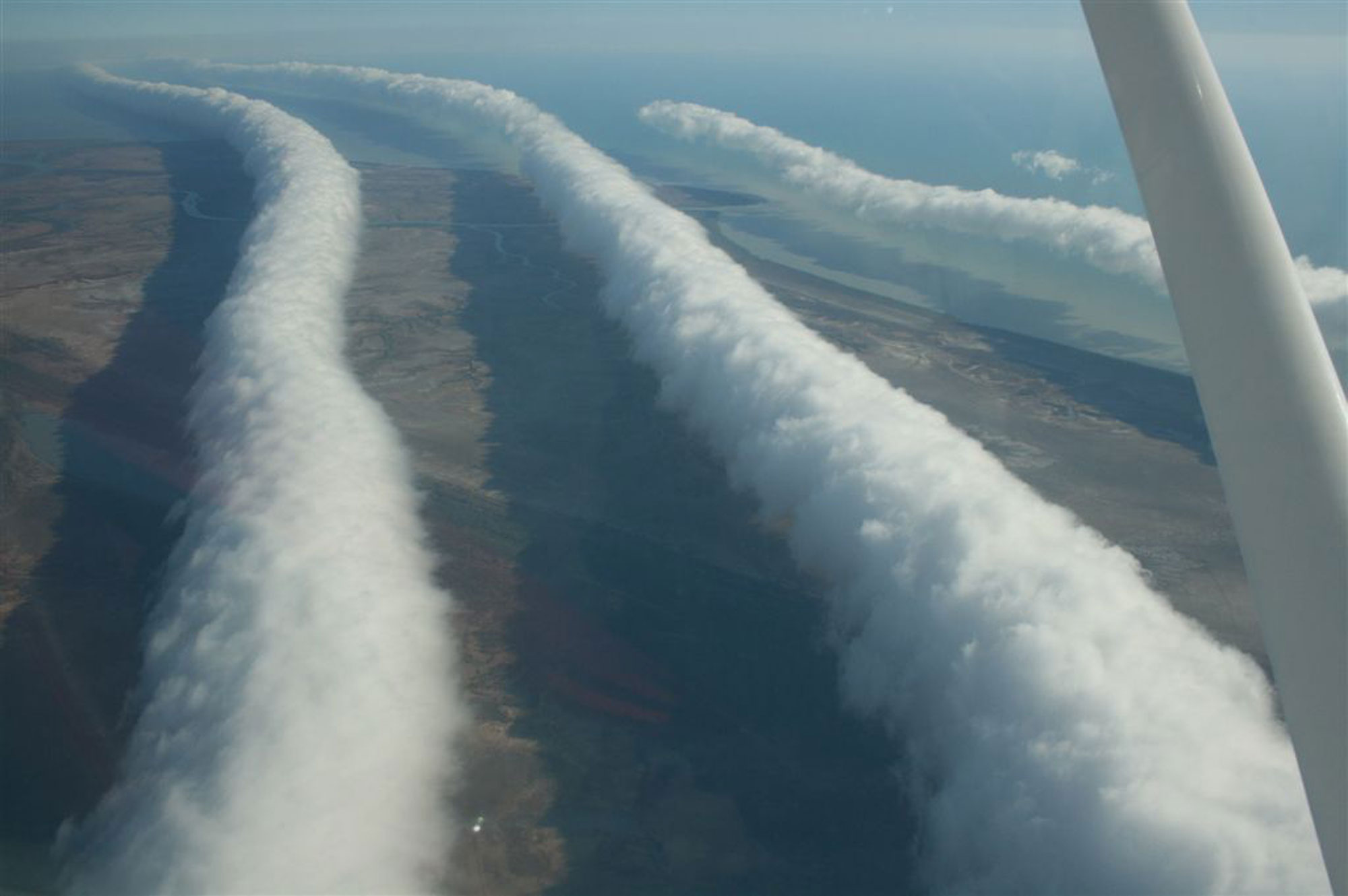 If you are cycling through Burketown between August and September, look up…way up! You may be fortunate enough to see a very rare meteorological phenomenon – Morning Glory clouds. Shaped like tubes, these clouds usually appear in groups, can be up to 1000 km long, 2 km high, travel at 60 km/hr and may be only 200 m above the ground. While they have been spotted in other places around the world, it is here in the Gulf of Carpentaria that they are most frequent and predictable. These clouds have been sighted since ancient times. The local Garrawa Aboriginal people called them ‘kangólgi’. The exact nature of this complex atmospheric phenomenon is largely still a mystery. Local weather lore in the area suggests that when the fridges frost over and the café tables’ corners curl upwards at the historic Burketown Pub, there is enough moisture in the air for the clouds to form. Once that happens, track down a local glider pilot and get in some cloud surfing.

The Gulflander – From Nowhere To Nowhere 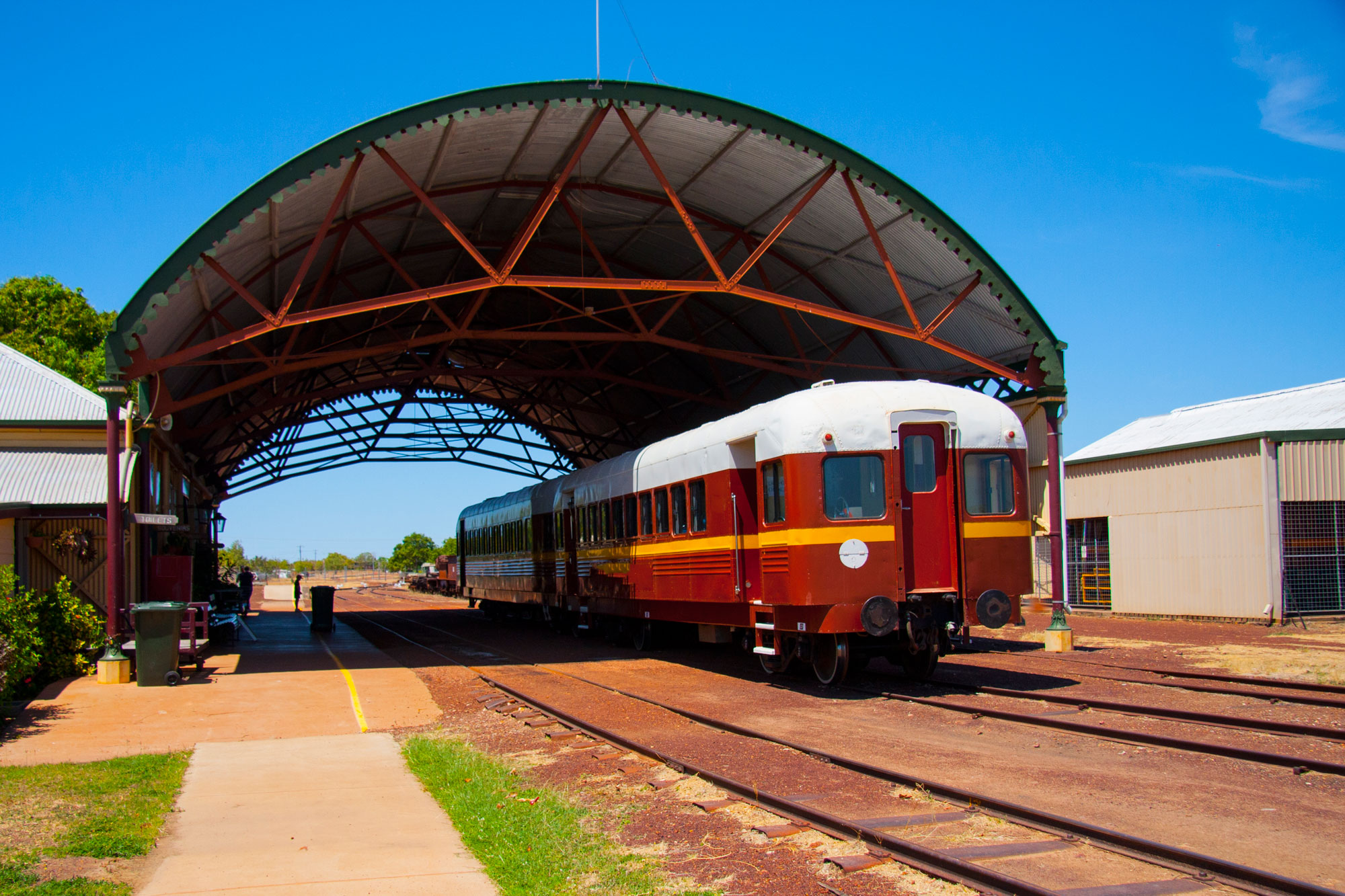 Normanton railway station with the Gulflander – The Tin Hare – rail-motor train ready to depart to Croyden.

Gold was the catalyst for the development of the railway from the bustling river port of Normanton to the rich gold fields of Croydon. In 1888 construction began on a submersible line in the fickle flood-prone terrain, using specially designed and patented steel railway ties. They were hollow and packed with mud to allow flood waters to flow over, leaving the track intact when they receded. Even today, over 100 years on, the majority of the original sleepers are still intact. Once a week the 1950’s rail car nicknamed the ‘Old Tin Hare’ will head off through savannah grass, billabongs and termite mounds, halting at colourful stops like Critters Camp, Blackbull and Timbercutters. The train staff will keep you entertained with trivia, species identification, amusing stories and colourful characters. Runs every week from Normanton to Croydon (Wednesday) and Croydon to Normanton (Thursday). 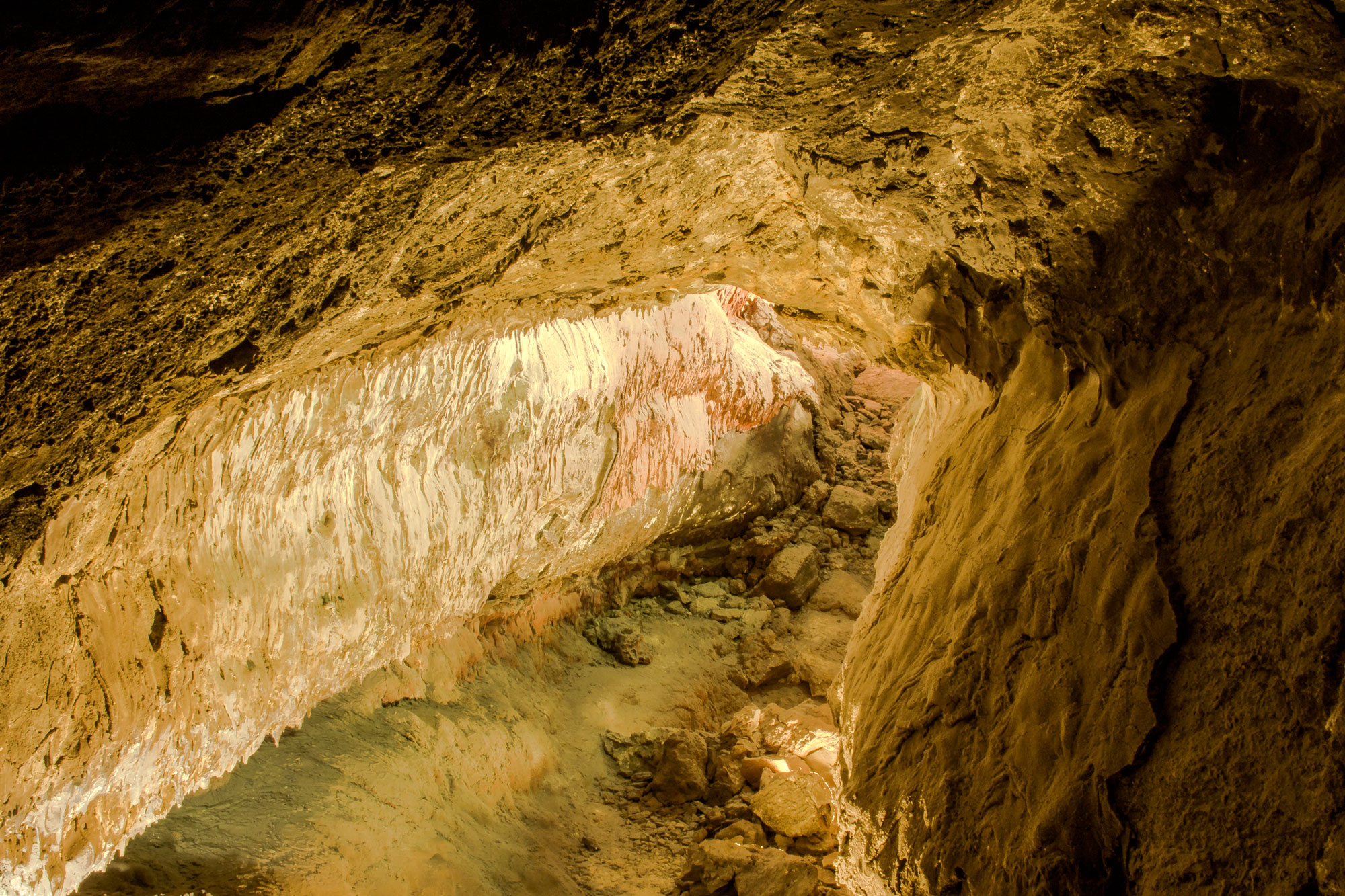 Undara Volcanic National Park is certainly worth the quick 14 km detour off the main Savannah Way route. Here you can find the remains of the Earth’s longest flow of lava originating from a single volcanic crater – 160 km in length. In fact, the word Undara is aboriginal in origin and means ‘a long way’. The area features over 160 volcanoes, vents and cones. The activity that created the tubes took place about 189,000 years ago when the surface of the lava cooled while hot lava continued to move through the centre of the flows. Huge caves, some over 21m wide and up to 10m high, have formed along the tubes. For example, Bayliss Cave, 1,300 m long, 11 m high and 22 m wide, is what remains of a lava tube that was once over 100 kilometres long. It is a “bad air cave” with measured carbon dioxide levels as high as almost 6%! Despite that, the cave is home to 52 resident animal species making it one of the world’s most biologically diverse caves. Once back on the surface, you can search for minerals like topaz, moonstone, peridot, aquamarine, garnet, quartz and gold or, during the breeding season,  watch micro-bats and night tigers (snakes)  wage war at the edge of the surrounding caves. The snakes hang in the nearby trees and strike at the micro-bats as they pass into and out of the caves.