Well, here it is – TDA Global Cycling’s inaugural cycling tour of Madagascar, perhaps one of Africa’s most exotic countries, has begun.

Getting to the starting line was a bit of an adventure in itself. While there are more and more international flights popping up that fly directly to Antananarivo (some flew into the capital of Madagascar directly from Europe, for example), often a stopover in Nairobi, Addis Ababa, or Johannesburg is required, depending on where you are flying from.

Then a smaller flight to Toliare was required, and from there the 20km to Ifaty wasn’t too tedious. Certainly the hotel, perched on the side of a hill overlooking the beautiful Mozambique Channel, was a welcome sight and an ideal starting point for the Magical Madagascar tour.

TDA was able to deliver all the riders’ bikes from Antananarivo to Ifaty by bus, which made things a little easier for all the participants as once they arrived in the capital they no longer had to worry about their bicycles. Once in Ifaty, our bike mechanic Baba assemble them all in preparation for the following riding day.

From a staff point of view, it bodes well that pretty much all of the riders on this tour are TDA alumni. Things like the day bag/permanent bag situation, what to expect at lunch, and the thumbs up/thumbs down routine are familiar habits from previous tours that prove to be just like… well, riding a bicycle!

That being said, the first riding day wasn’t particularly a “thumbs down” kind of day… 41km from start to finish with roughly a hundred metres of elevation and a similar level of descent made for a pleasant little warmup to the tour. 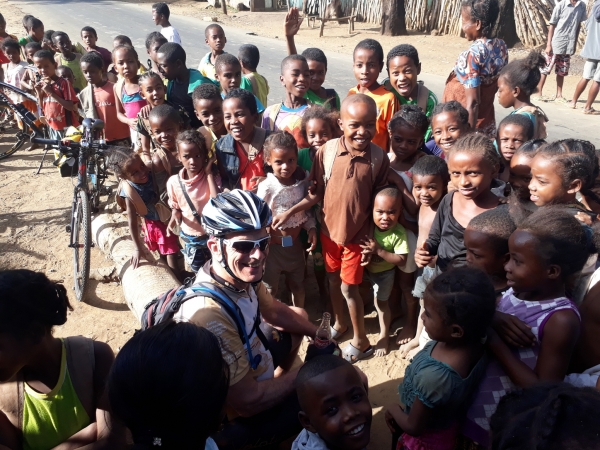 The second riding day offered a bit more time on the saddle, as we rode 127km through numerous villages and a particularly beautiful section winding through the hills towards the end of the day near Sakaraha.

It was during this ride that cyclists had the opportunity for a few Coke stops that allowed them to mingle with the locals and begin to get a feel for Madagascar. At about the 82km mark there was a small village called Andonarotsky known for its bootleg rum – as in, there are huge barrels by the side of the road where they sell homemade rum, so I guess the riders could have indulged in a “Rum and Coke Stop” if they’d wanted to, but perhaps for the medic’s sake, no one did (as far as I know!).

As for the third day’s riding, unfortunately I can’t tell you too much about it as four months of working on the Tour d’Afrique, followed immediately by a celebratory night in Cape Town which ended with an 8-hour transit to Antananarivo, a 2-hour argument with airport officials over where the heck my bike and a bag full of important TDA equipment ended up, and then a 48-hour bus ride to Ifaty eventually caught up to me and I ended up so ill on Day 3 that much of the day passed by in a blur. 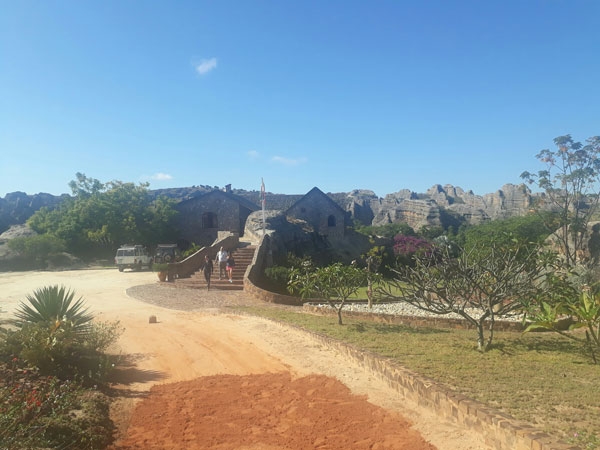 Luckily, our accommodation for Isalo National Park and our first rest day of the tour is quite luxurious (not to mention incredibly scenic!), so it’s the perfect spot to recover. As I write this, nearly all of the riders are out on a hike through the national park to soak in the unique rocky landscape of this part of Madagascar.

The remaining riders are treating themselves to a full body massage and I’m (very cautiously) sipping my first beer in a few days to see how it sits in my recently recovered stomach while I hit SEND on the first of several blogs about our adventures cycling across the exotic “8th Continent” or “Red Island”.