My first trip with TDA Global Cycling as a bicycle expedition chef was from Cairo to Cape Town in 2006. I had been working 55 hours a week cooking in some of the nicer restaurants in Montreal, when I packed up my camping gear and flew to Cairo, to cook for up to 80 cyclists at a time on their journey across Africa. To be honest I had no idea what I was getting into. 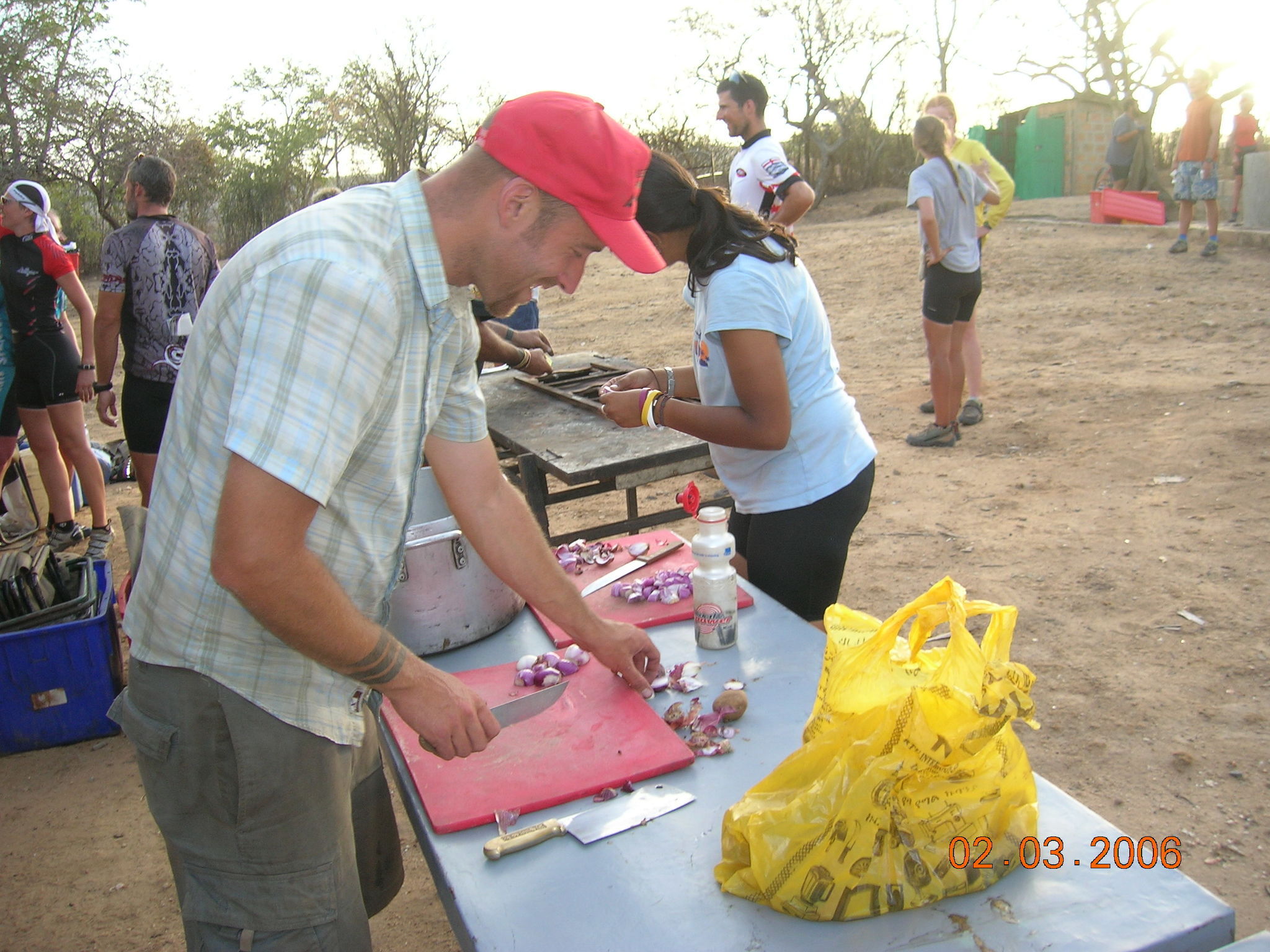 Being in Cairo getting ready I was fortunate to have a local Egyptian, Rezk, to help ease me into the role. He had cooked on the Egyptian portion of the trip for the previous 3 years and so I followed his lead. To make things more challenging it was Ramadan and finding any shops open to sell us the supplies we would need required a lot of local knowledge, we made it work though. There were comical moments as well; The Egyptian chef stuffing 30 frozen chickens in the underbelly of our bus in front of our Cairo Hotel, A spice seller who had to be bargained down for almost an hour before we could purchase our spices, the wind storm on the Red Sea where people’s tents blew head over heels across the desert with the cyclists trying to chase them down. 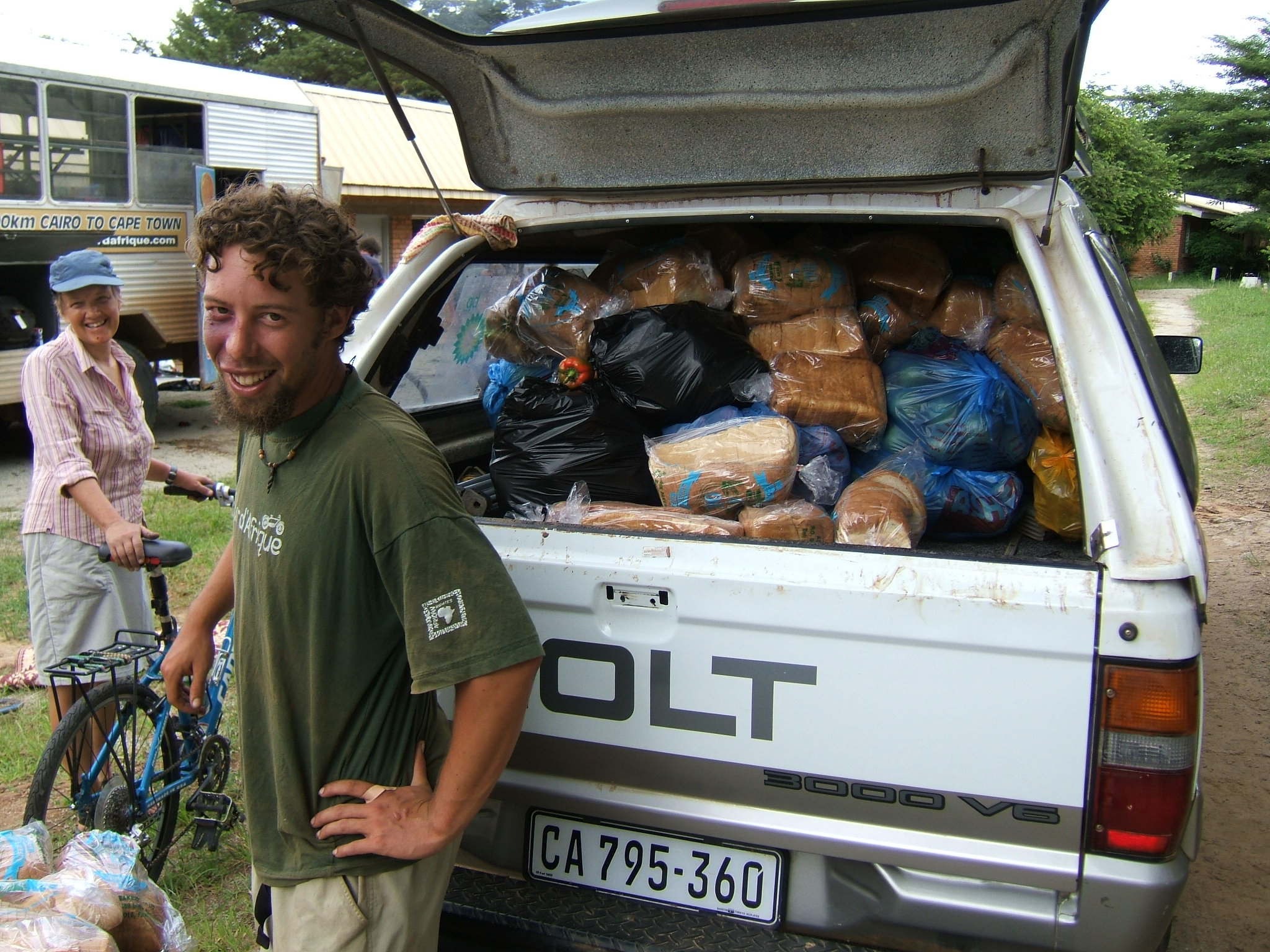 Later on during the tour and in future years I would realize that cooking in Egypt is really a breeze. The fun starts when you get to Sudan and Ethiopia. You have to really scour the markets for the quantity, quality and variety of produce or meats that you require. I also had local assistants in both of those countries and one of my favourites was a man named Abdul Baggi in Sudan. I would drive our 4×4 across the sandy paths of the Nubian Desert, the Nile River with its’ splendid Palm trees and lush agriculture in the distance. 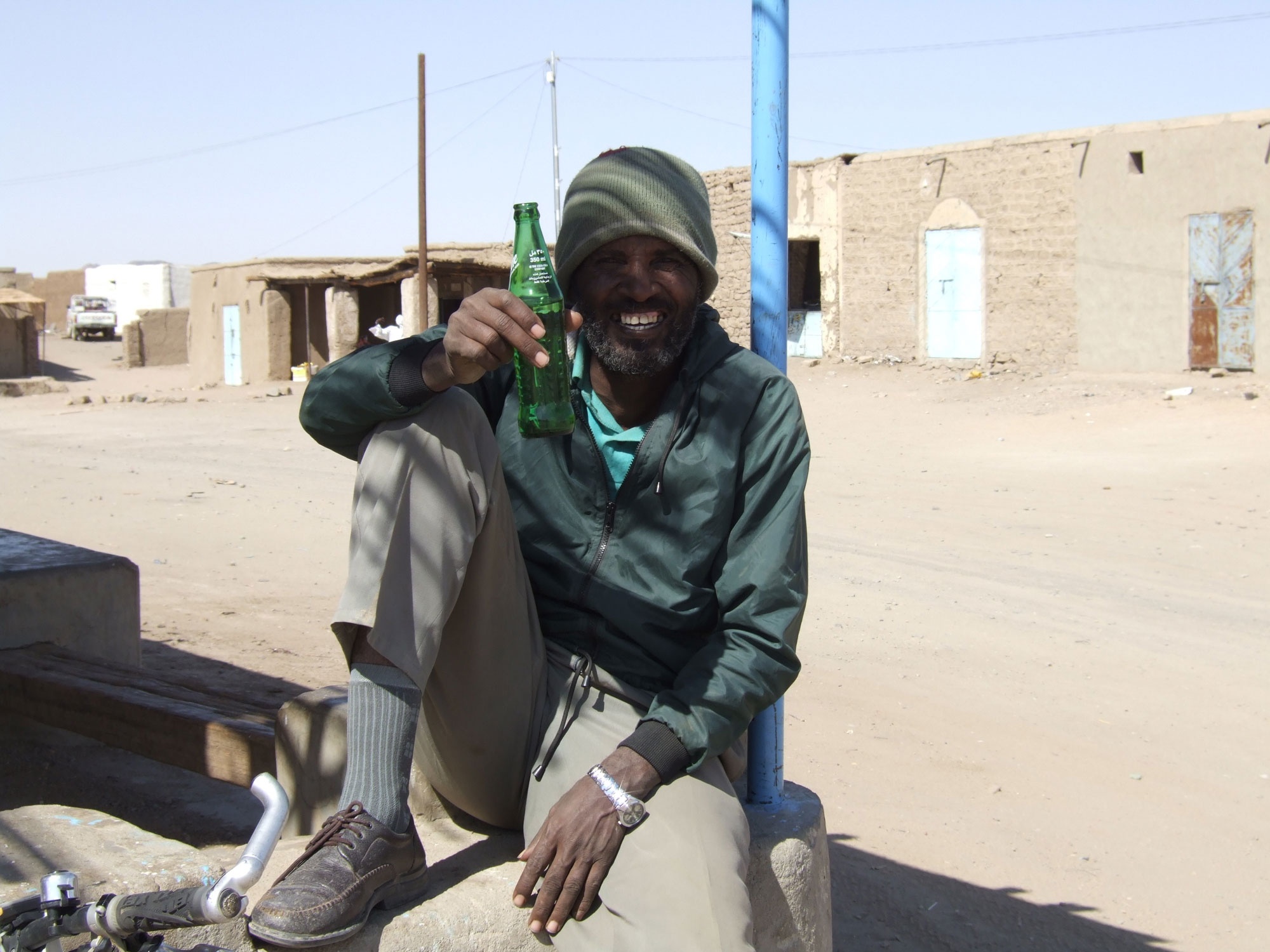 Abdul, who worked for the Ministry of Tourism, had been across Sudan with different tourist groups and NGO’s many times, over many years, and yet never in my life have I met someone so challenged by navigation, and so tuned out to most things going on around him. That said I’ve rarely met someone so authentic, and with so many insightful stories from his decades on the road in Sudan. In camp he would sit in the sand smoking an endless quantity of cigarettes as I slaved away prepping that nights meal. Most of that doesn’t make Abdul sound very helpful, but what I loved about him was his laugh and his incredible self-esteem. No matter how lost he would get us driving each day, he truly believed he was always right about his navigation choices, and when we would eventually change course and find our way, he’d claim that it was the way he’d said to go all along. Then he would simply laugh and laugh a heartfelt, warm and slightly crazed laugh until no one would bother him anymore. 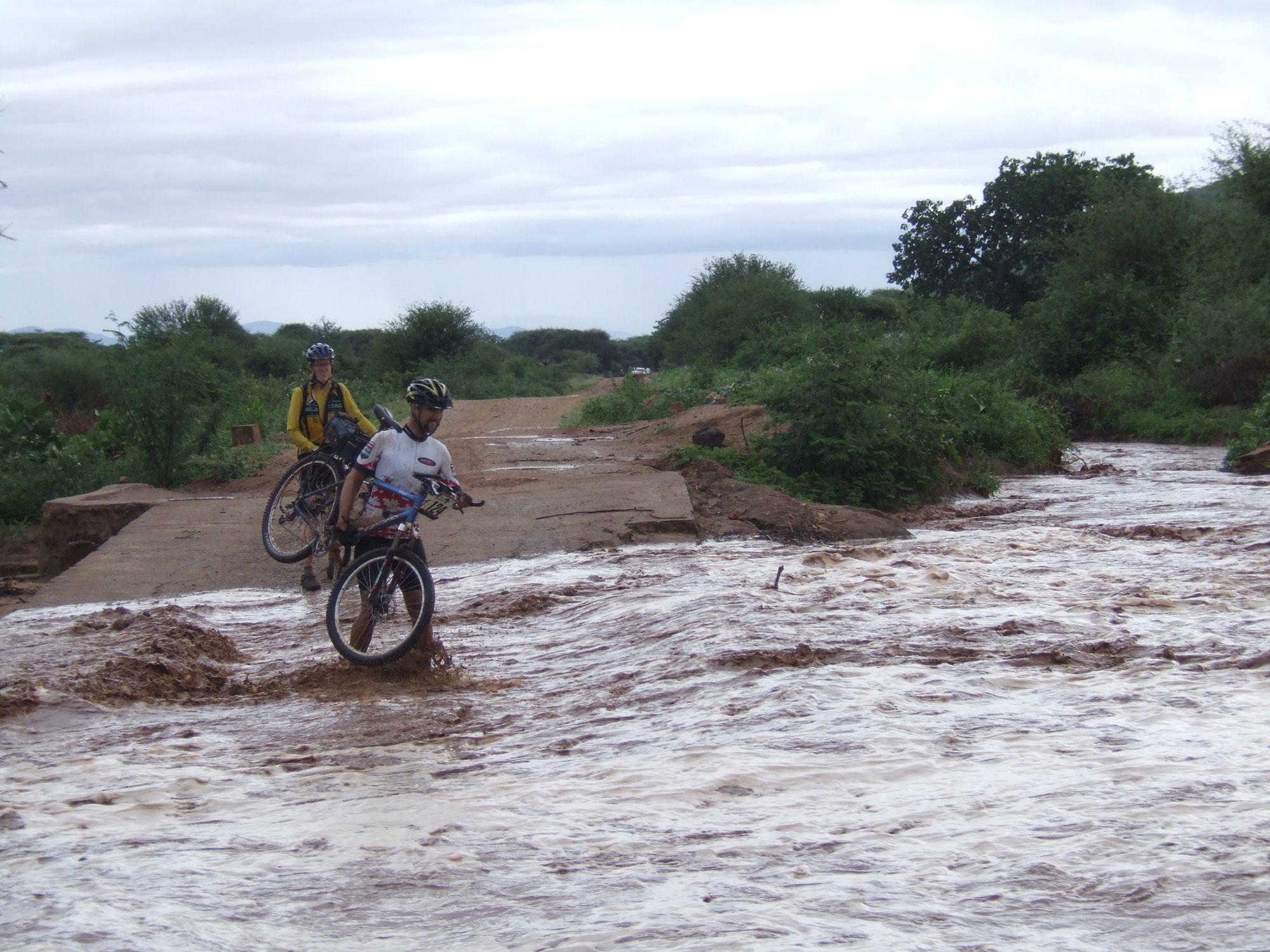 The rainy season in Tanzania

Nowadays when a new chef is starting out working on the Africa trip I explain to them all the details of how a standard day will work. Then I tell them to expect things to go like that about 1 out of 4 days. A good example is the unpaved, interior roads of Tanzania. On their own they are a challenge to get through by bike or 4×4 vehicle, add rain and all bets are off. One year I was cooking on the tour and the rainy season decided to hit early, we knew we were heading for a big mess of mud. I was driving the 4×4 in order to get ahead of the cyclists and shop for supplies in the villages along the way. That’s when I came to a point in the road, or what had been the road, where a raging river was now flowing.

I grew up in the city, had never owned a car and never driven a car off-road until I came to Africa, so what to do in this situation wasn’t second nature. At the same time I figured the cyclists would probably be able to make it through this river and they weren’t far behind. So what do you do? Well first you walk into the river and see if it sweeps you away to your death. Assuming you don’t get swept away and the water doesn’t go above your waist, you get back to the vehicle, roll up the windows and go for it. 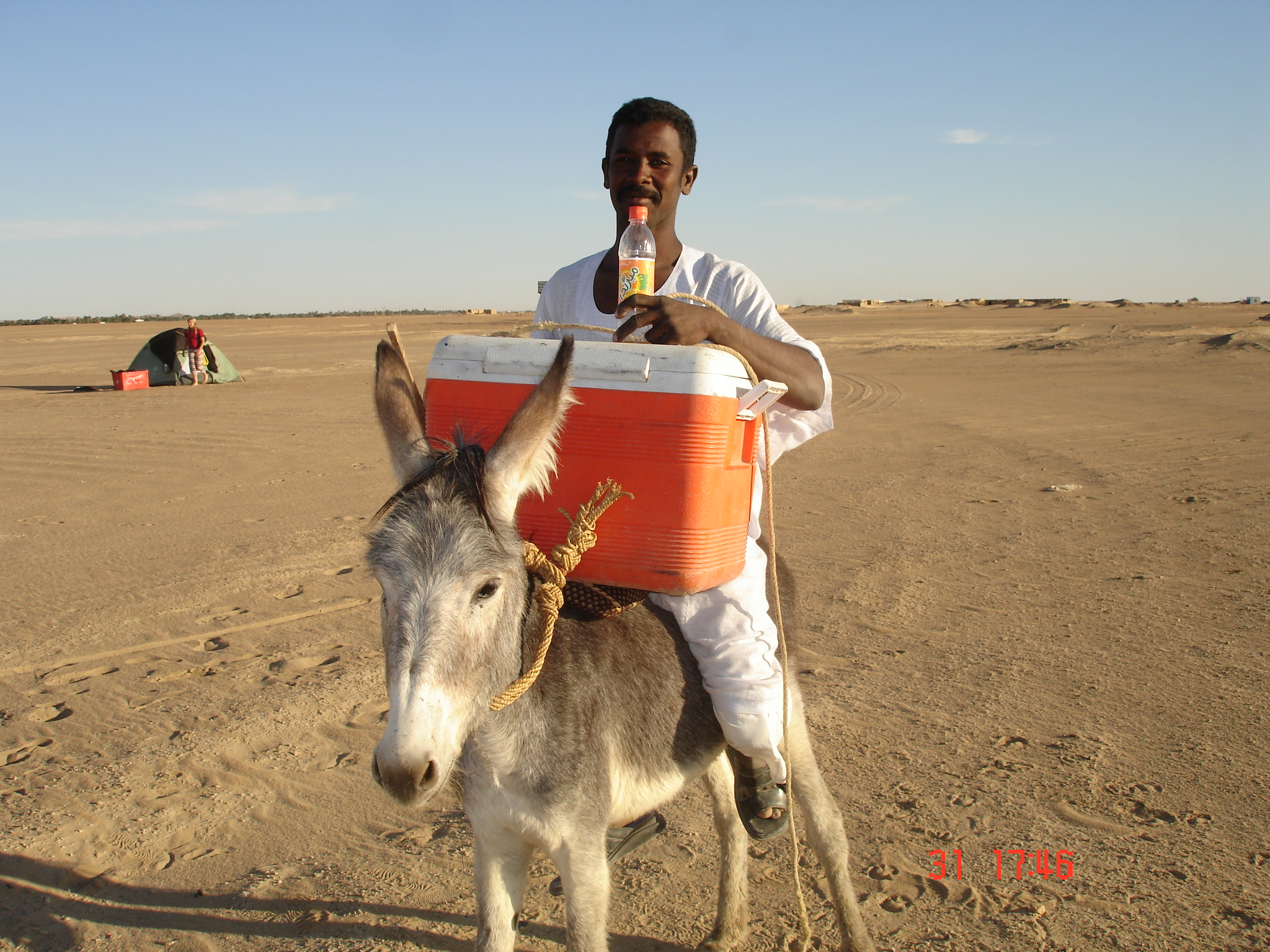 Oh wait though, before that you sit back and relax and enjoy one of the most wonderful things in Africa, which is small-scale entrepreneurship. No matter what road you are on, no matter how remote, lost somewhere in the jungle just south of the equator, if there is a vehicle stuck blocking the road, or let’s say, a river running across a road holding up traffic, you’re guaranteed to find someone who comes along and starts a small fire to roast corn, or brew tea or who brings chapattis their mom made to sell. This is a truly beautiful aspect of much of Africa. You’re never really stuck; you’re just living life at a local pace. 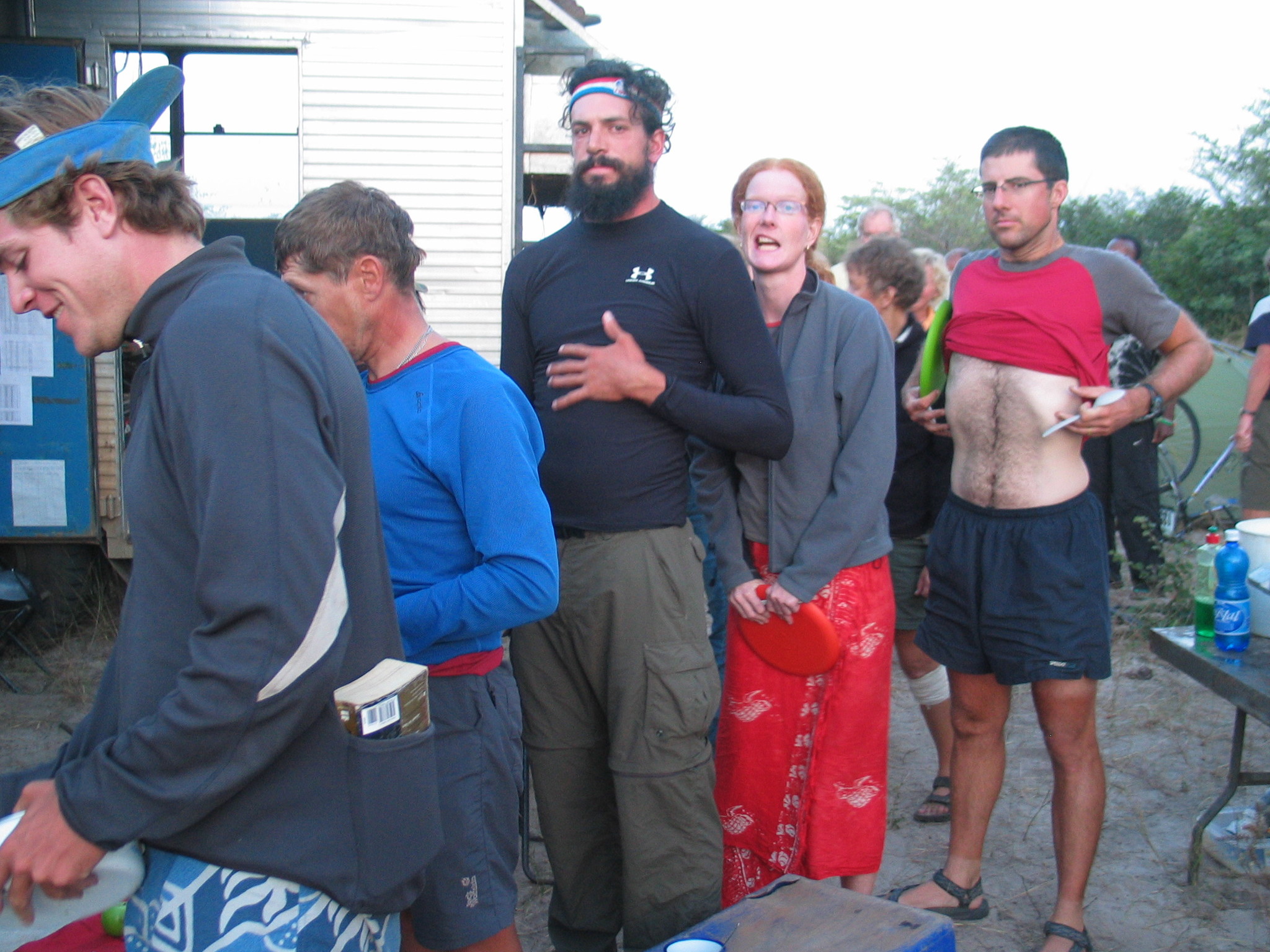 I did make it through that river, and I made it to our camp too. Unfortunately our trucks, which carry all the baggage and kitchen supplies of the tour didn’t show up till about 10pm, after having to be dug out from the mud on more than one occasion. There is always a way to manage though, we found enough cooked chicken for sale in the local village we camped by, enough chapattis, enough cooked spinach to feed the cyclists. In the dark everyone put up their tents, exhausted bodies finally laid down after a very long day of cycling and waiting for the trucks. So how about the next day? Pretty much the same thing… maybe that standard day really is everyday, it’s just a new kind of standard.